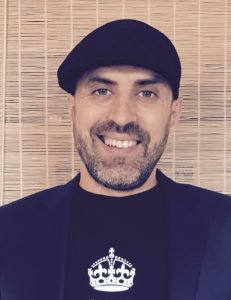 Originally from France from a multicultural family background, Yann Guignon has spent over 10 years practicing and studying the traditions of the Gabonese Forest people. Initially working with Aristide Nguema of E-BOGA in France before iboga was scheduled there in 2007, he was initiated in Gabon in 2006 by Atome Ribenga and has trained to be a ‘Kambo’ (Temple Guardian) with him, ‘Tatayo’ (Hugues Obiag Poitevin of the NGO E-bando) and other initiatory masters from different branches of the tradition collectively known as Bwiti.

He has intensively researched iboga and worked alongside Professor Jean Noel Gassita, the worldwide doyen of iboga research. A pharmacist, he was Gabonese President Bongo’s advisor and opened the door to Howard Lotsof who was credited with discovering the anti-addictive properties of the extracted alkaloid of iboga, ibogaine. As wild resources of iboga became increasingly under pressure due to global demand, Yann and Professor Gassita hosted a meeting with the Gabonese authorities through the First Lady of the Gabonese Republic, Sylvia Bongo Ondimba’s Foundation, to find out the current situation with regards to iboga in Gabon. For six months in 2011 he brought together the views of representatives from all the branches of the Bwiti tradition, data collected from 7 years of his own research and 60 years of work by Professor Gassita. He submitted a 50 page report to President Ali Bongo Ondimba in 2012 announcing that iboga could disappear from the public domain by 2018 if something was not urgently done to protect this precious resource.

As a direct result of this report, iboga was integrated into the Nagoya Protocol (ratified by Gabon in 2012) which provided a major international legal instrument for the protection of this tree and the traditional knowledge surrounding it. The Gabonese Minister of Culture recognized Yann Guignon as a benefactor of Gabon’s Cultural Heritage and gave him the mandate to represent Gabon at the 4th international conference on iboga(ine), organized by the Global Ibogaine Therapist Alliance in Durban (South Africa) in September 2014.

Yann spent a total of 9 years living in Gabon where he made and participated in several Gabonese television programs (including La tradition Bwitiste and l’iboga au Gabon in French or Ca c’explique that has English subtitles) which started a public debate on westerner’s enthusiasm for iboga and the perspective carried by French institutions in this regard. While in Gabon, alongside working as an intercultural consultant through his consultancy Traits d’Union, Yann also led a number of community development projects, such as helping the NGO Ebando to restructure its work around integrating young, disadvantaged Gabonese through the manufacture of traditional jewelry, and working in collaboration with the Gabonese National Park Agency to track iboga smugglers, who are closely connected to the trafficking of ivory.